Public Attitudes and Knowledge about HIV/AIDS in Georgia

Georgia has the fifth highest number of HIV/AIDS diagnoses in the country.  While the impact is felt across the state, three counties in Atlanta – Fulton, DeKalb and Clayton – have the highest prevalence rates (per 100,000 people) in the state.  As is the case nationally, Black residents have been most severely and disproportionately affected, accounting for two thirds (67%) of new diagnoses in Georgia in 2013. [1]

To better understand the views and experiences of Georgians on HIV/AIDS, the Kaiser Family Foundation conducted a representative survey of 556 adults residing in Georgia in the summer of 2015.  The survey was conducted as part of a public information partnership with the Georgia Department of Public Health.

HIV seen as a serious problem in Georgia.  For many Black Georgians, it’s personal.

A majority of Georgians – 74% – say HIV is a “serious” problem in their state, though race is a factor in how concerned residents are about the issue.  Blacks – those most affected – are significantly more likely than whites to view HIV as a “very serious” problem in Georgia (59% vs. 29%). 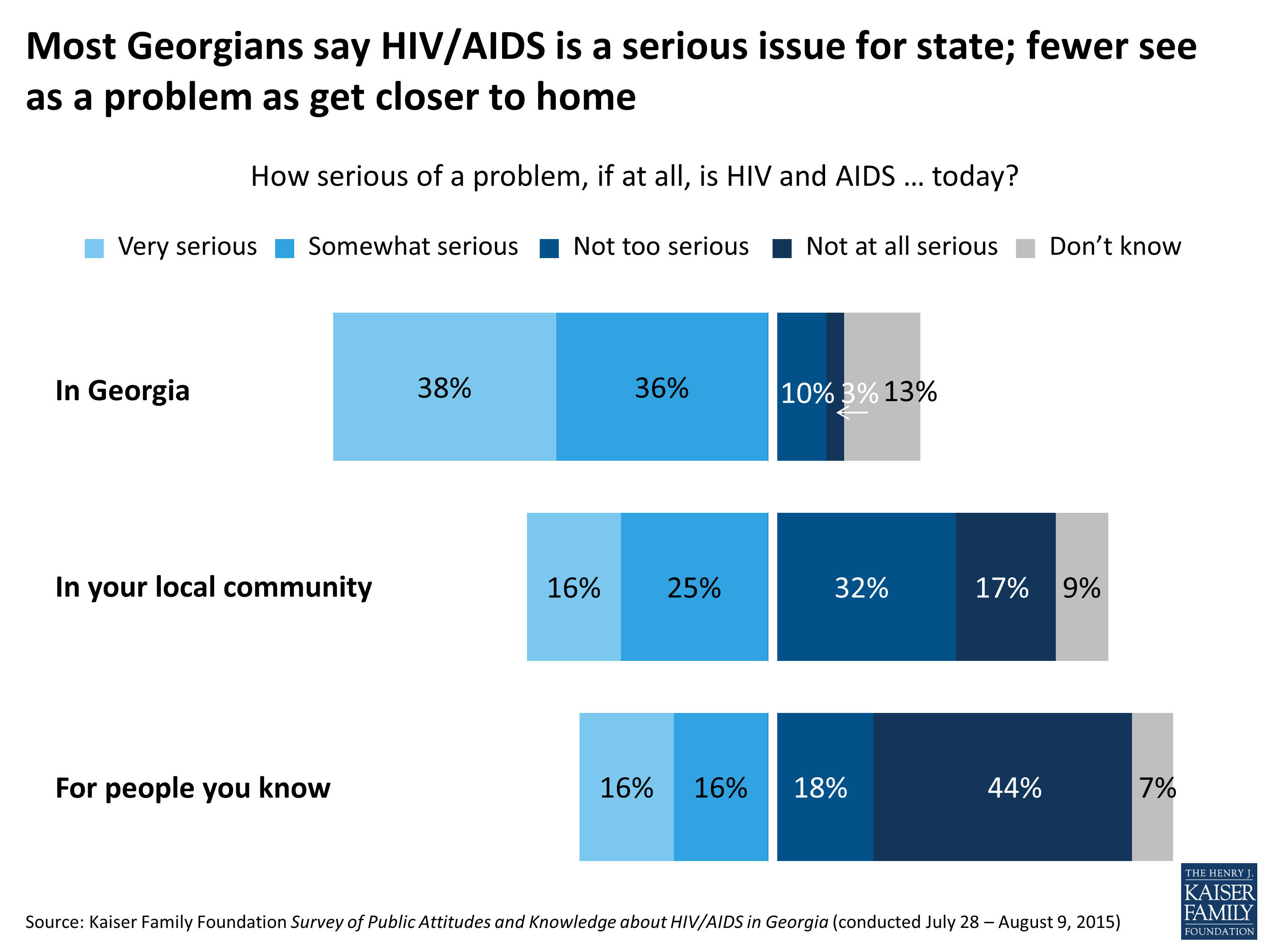 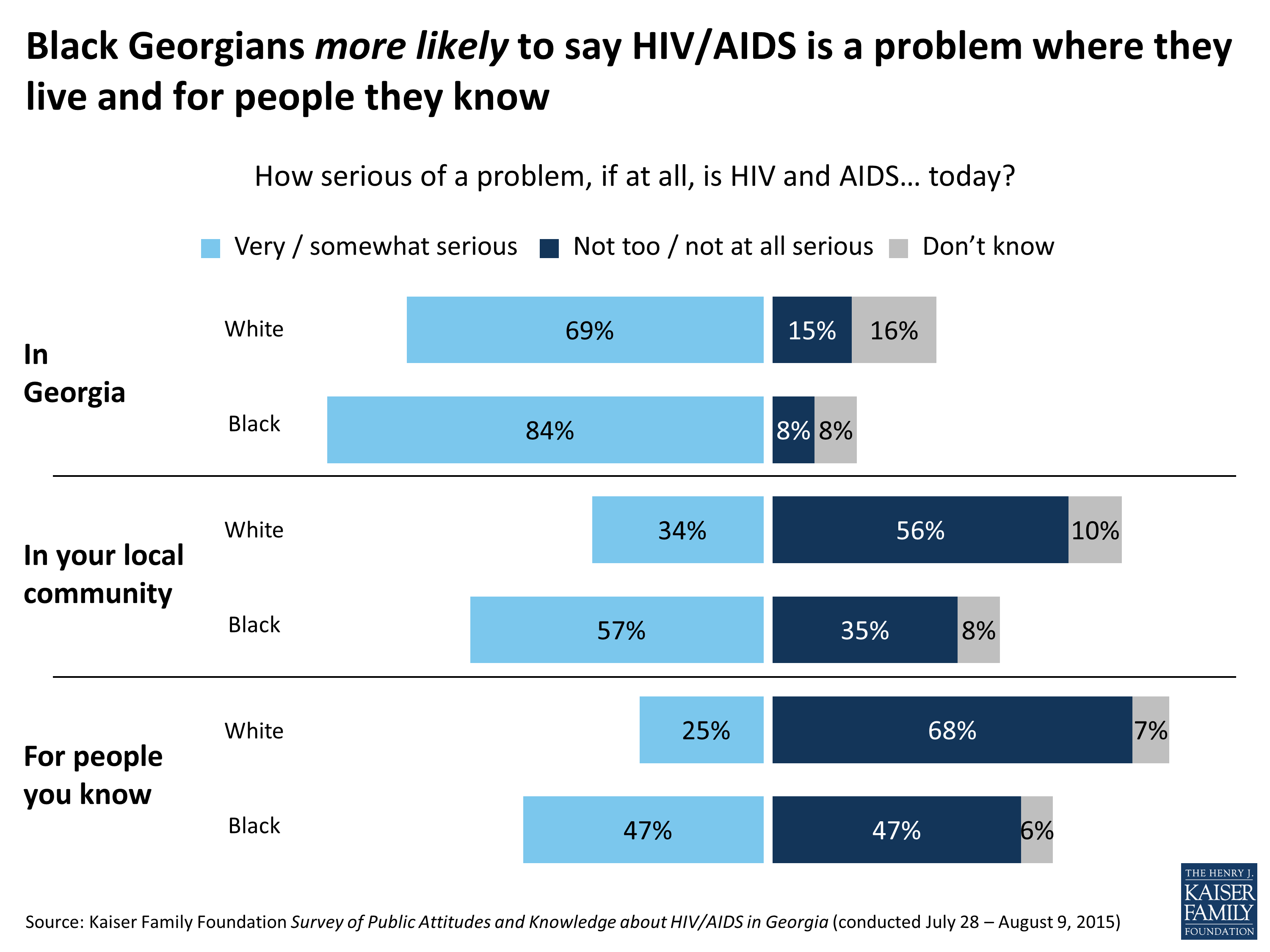 Black Georgians are also more likely to than whites to see HIV as an issue that hits closer to home.  Whereas more than half of Blacks say HIV is a serious problem where they live, about a third of whites say the same (57% vs. 34%).

Nearly twice the percent of Black Georgians, as whites, say HIV is a “serious” problem for people they know (47% vs. 25%).  More than one third of Blacks (35%) say they are personally “very concerned” about getting HIV, as compared to just 8 percent of whites. 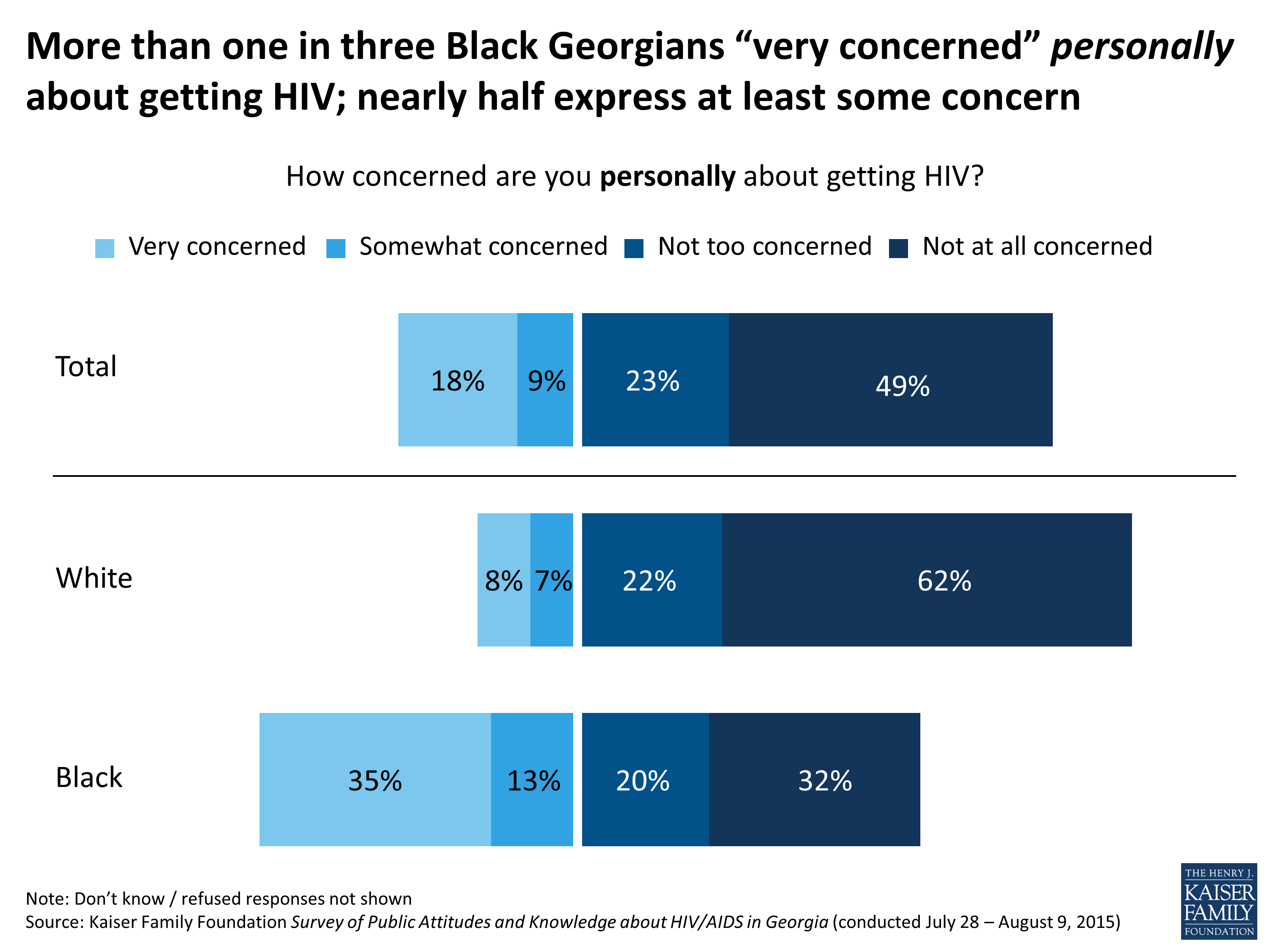 Close to half of Georgians – 46 percent – say they personally know someone living with, or who has died of, HIV/AIDS.  More than one in four Blacks – 28 percent – report a family member affected by the disease (compared with 5% of whites). 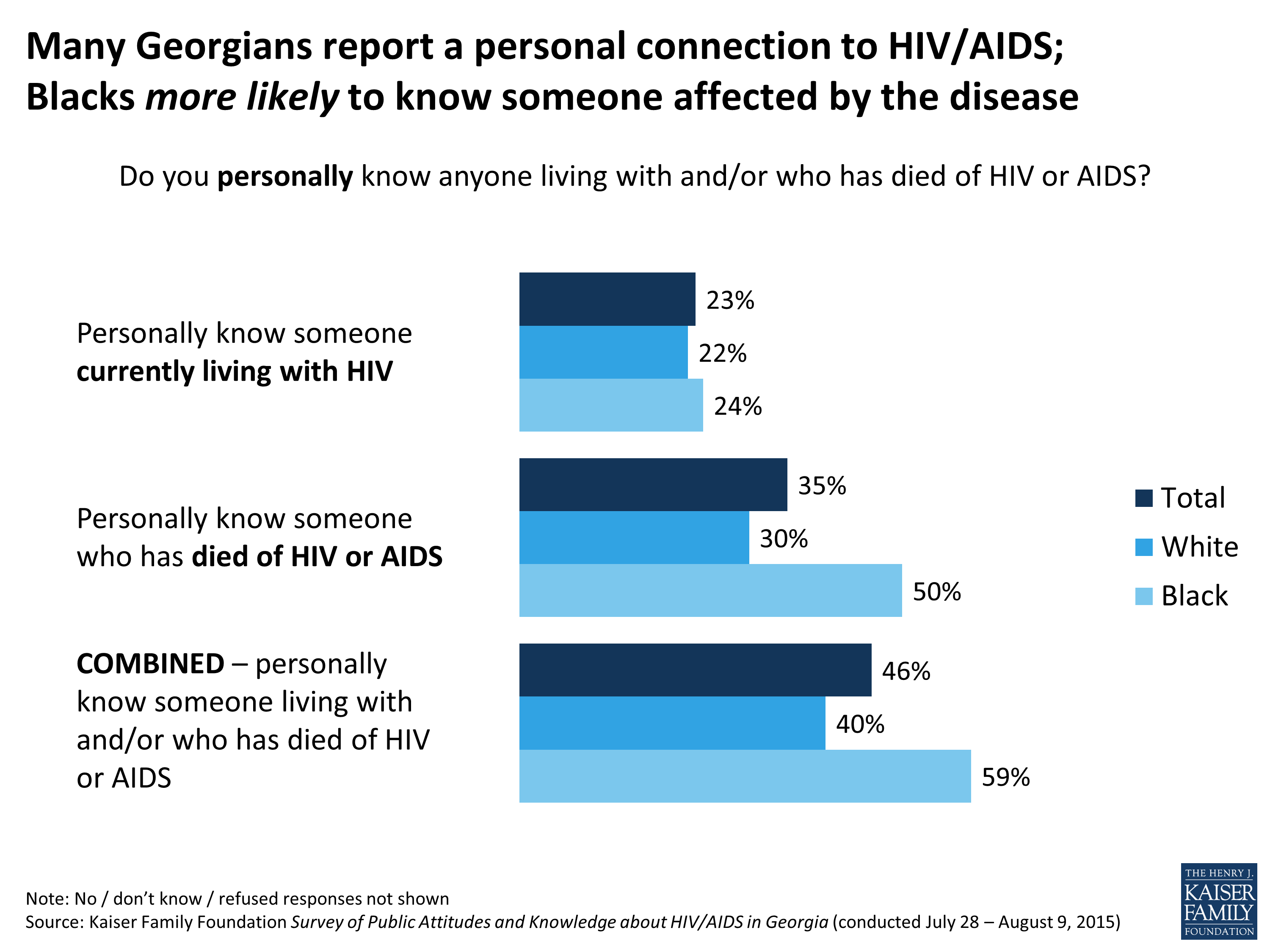 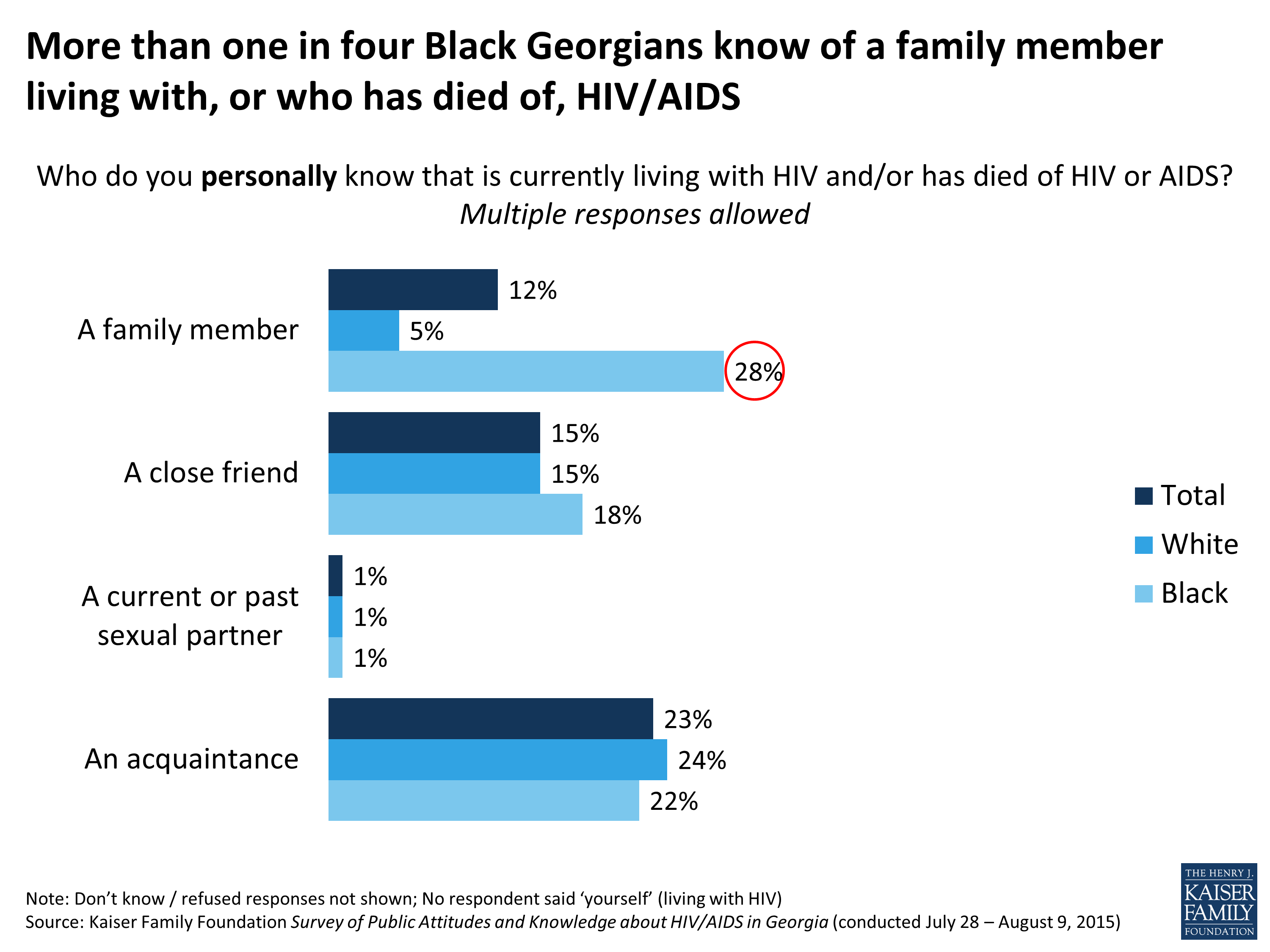 Family matters, but many Georgians say support is not there as much as it needs to be.

Overwhelmingly, 91 percent of Georgians agree that having the support of family and loved ones is “very important” to the health and well-being of people with HIV.  Yet, comparatively only 38 percent say most people with HIV in the state get that support (44% say most do not and 18% don’t know).  One contributing factor may be that despite the statistics, HIV is not something many Georgians are talking about these days, not even with those closest to them.  Blacks are more likely to report that HIV comes up in conversations with friends, family and/or intimate partners. 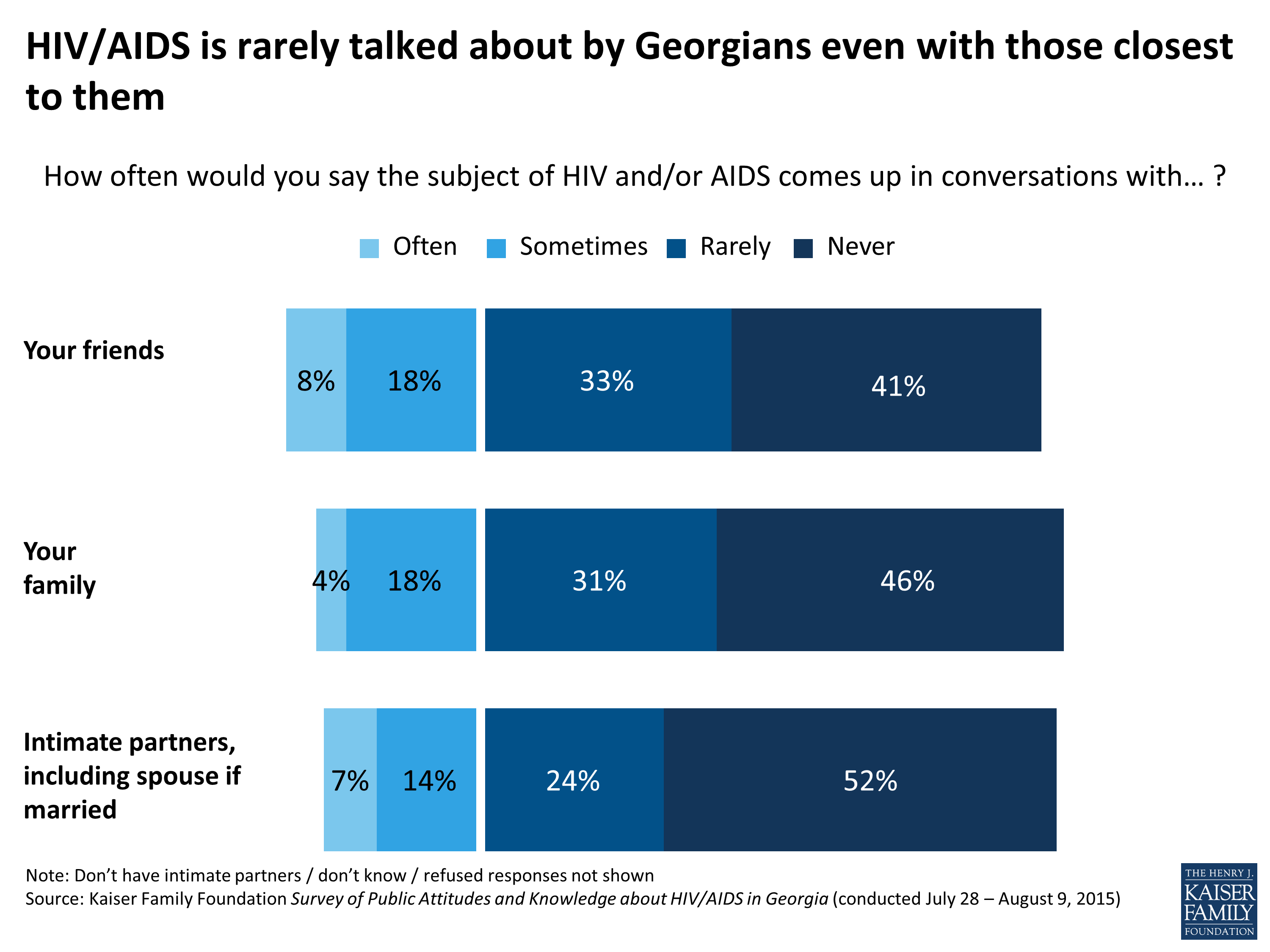 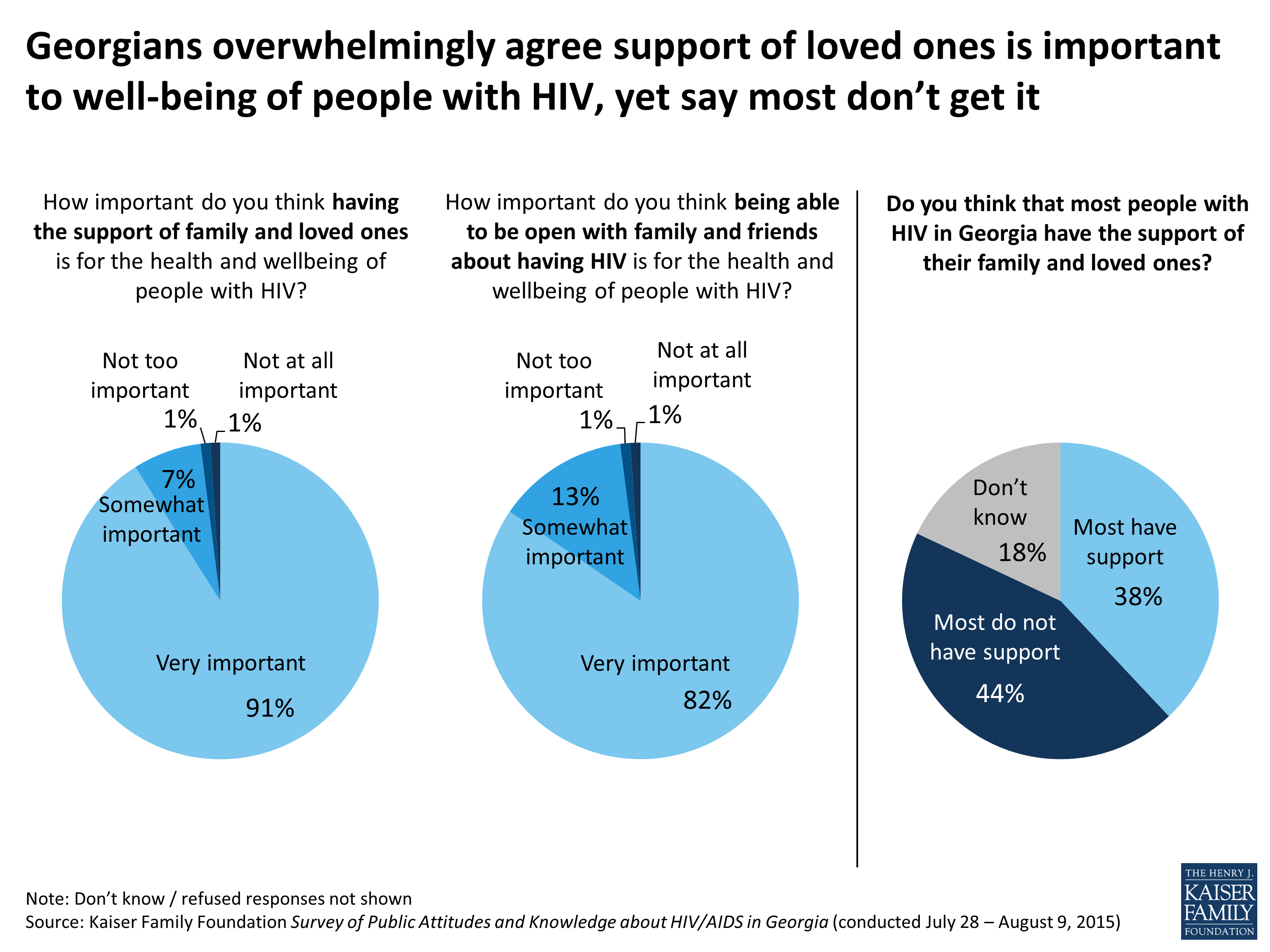 Roughly four in ten Black Georgians say they talk about HIV at least “sometimes” with people in their lives, as compared to fewer than 20 percent of whites. 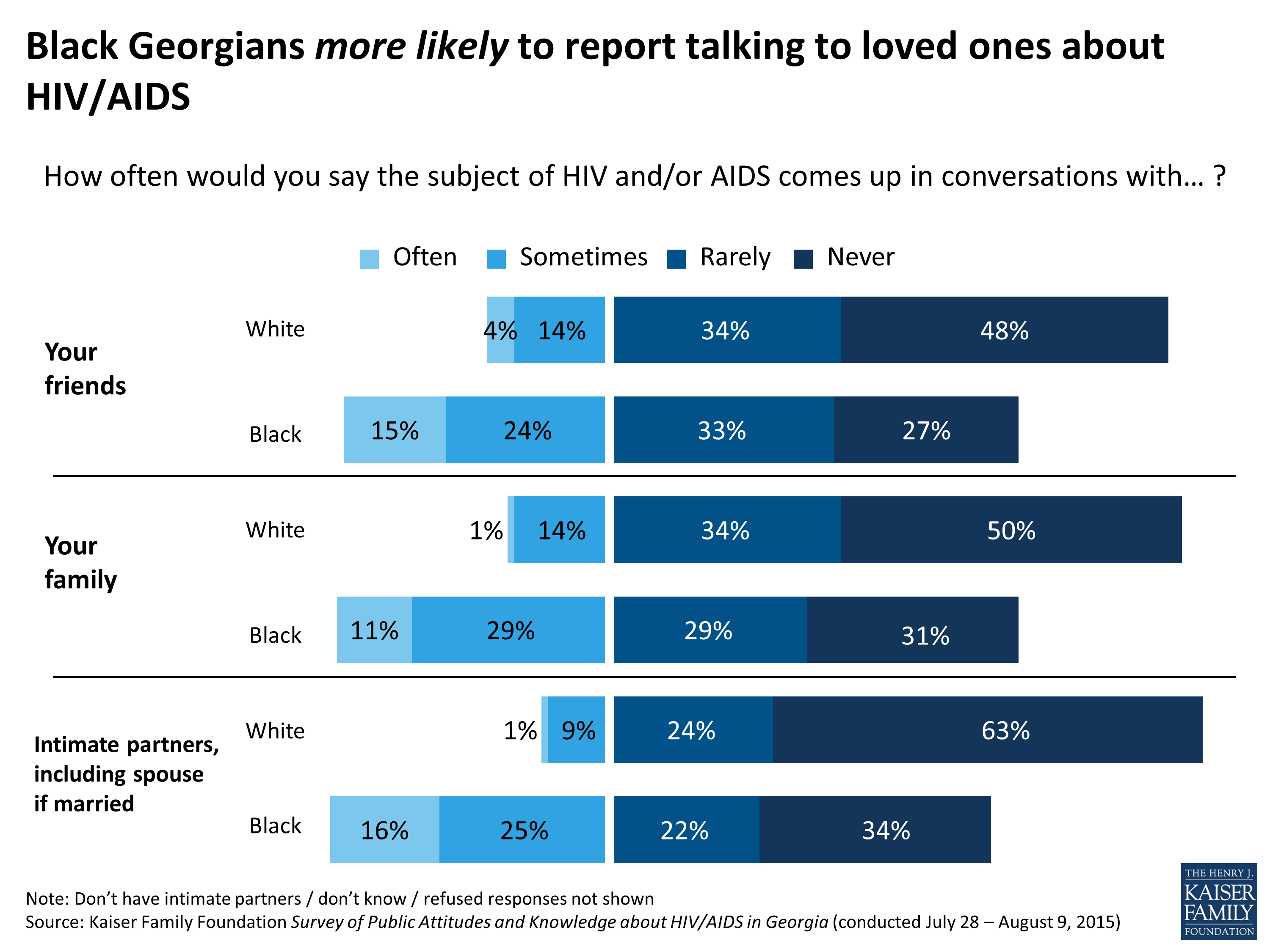 Most Georgians – 75 percent – say residents with HIV experience stigma and discrimination, with Blacks more likely to say there is “a lot” of stigma (51% compared to 32% of whites). 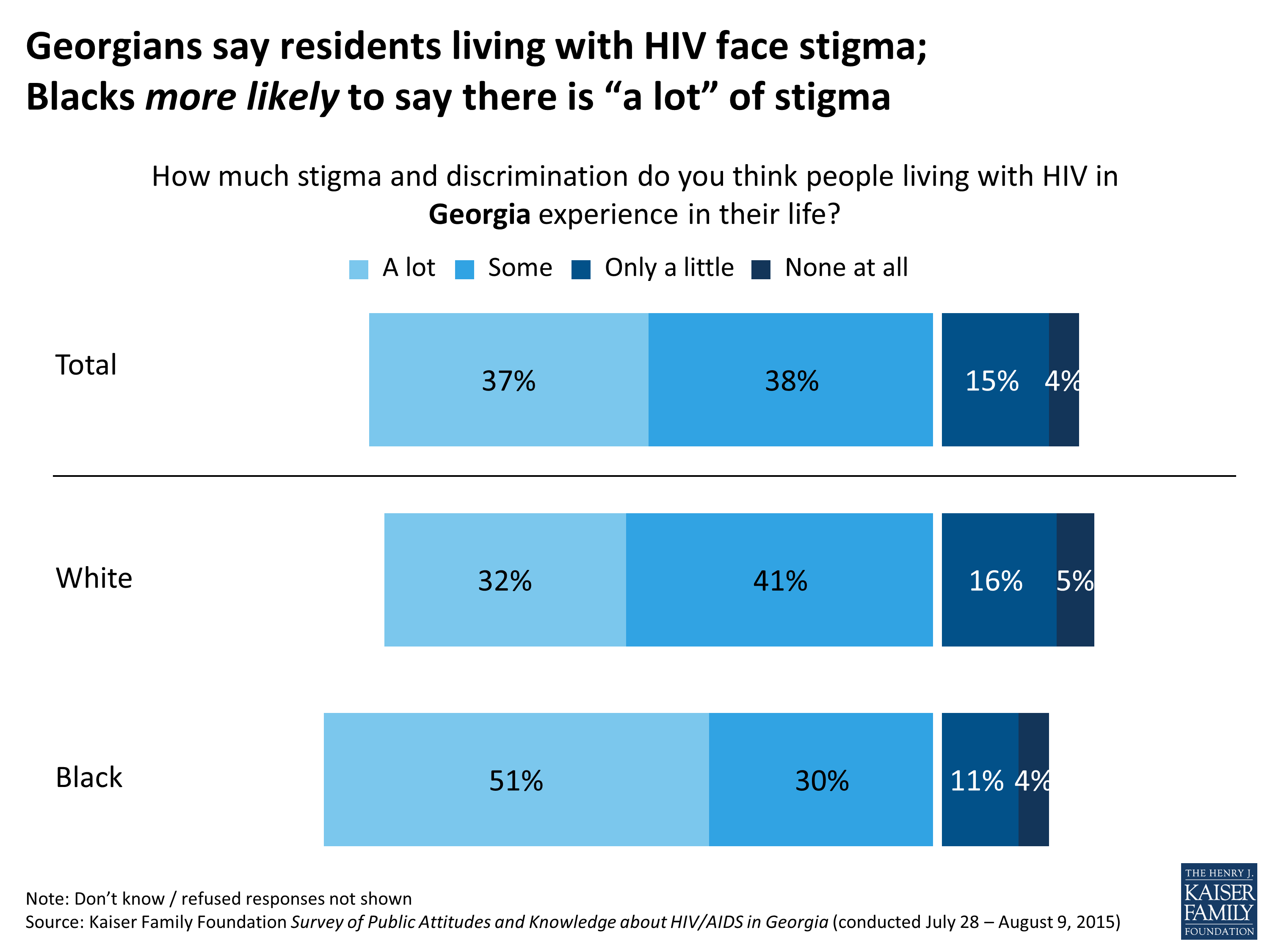 The self-acknowledged discomfort expressed by some Georgians toward people with HIV in different settings and relationships reflects an underlying stigma as well as misperceptions.  While most Georgians say they are “comfortable” working alongside (75% say “very” or “somewhat” comfortable) or being friends with (78%) someone with HIV today, there is more unease expressed about being roommates (44% say “very” or “somewhat” uncomfortable) or having intimate relations (90% uncomfortable) with a person with HIV. 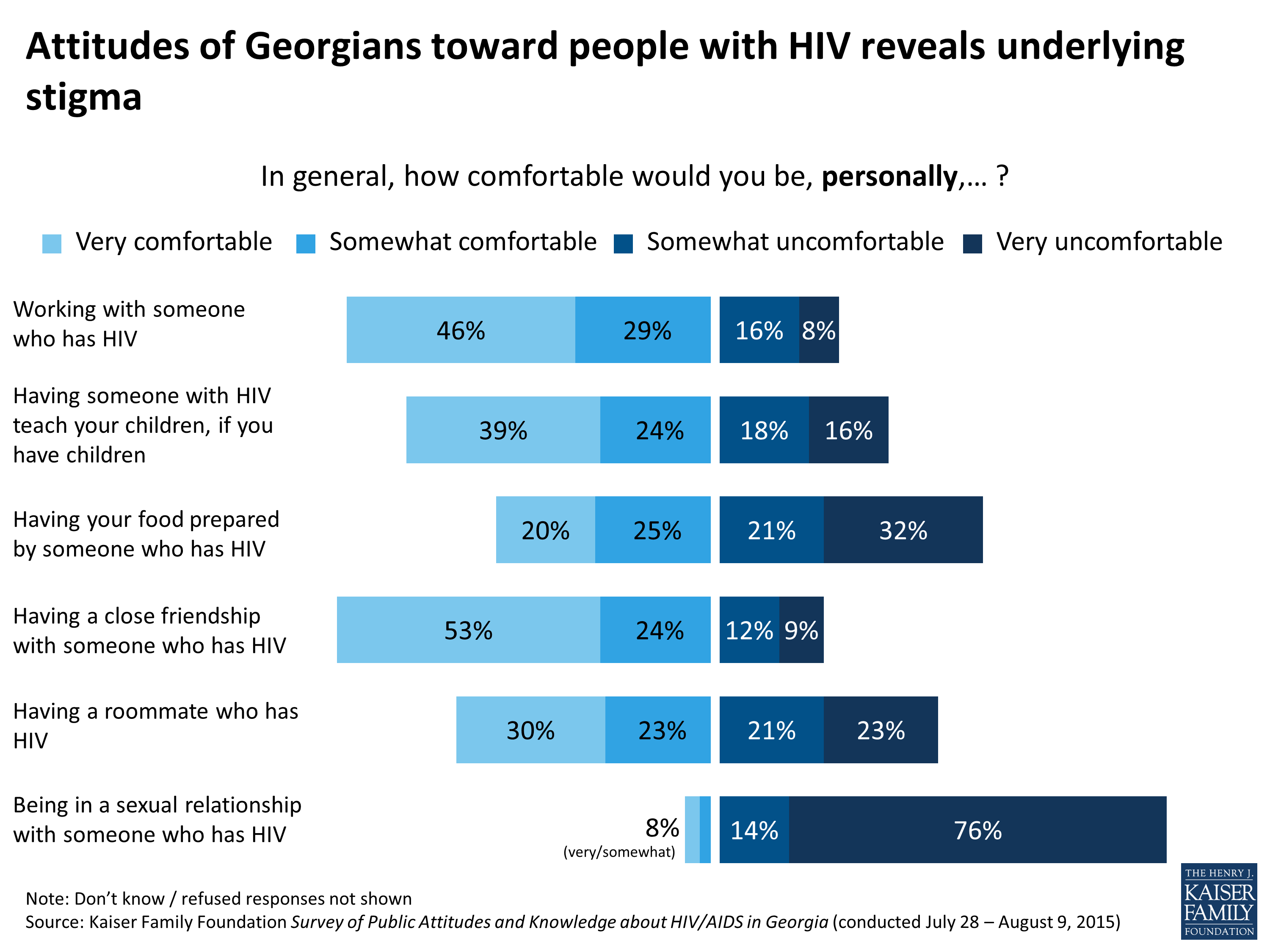 A concerning minority of Georgians hold misperceptions about HIV transmission through casual contact.  For example, 30 percent incorrectly believe, or are not sure whether, HIV can be passed by sharing a drinking glass, and more than one in five say toilet seats (24%) or swimming pools (21%).  A third (33%) think HIV can be passed by kissing, and another 13 percent are not sure – though experts say that is not possible. 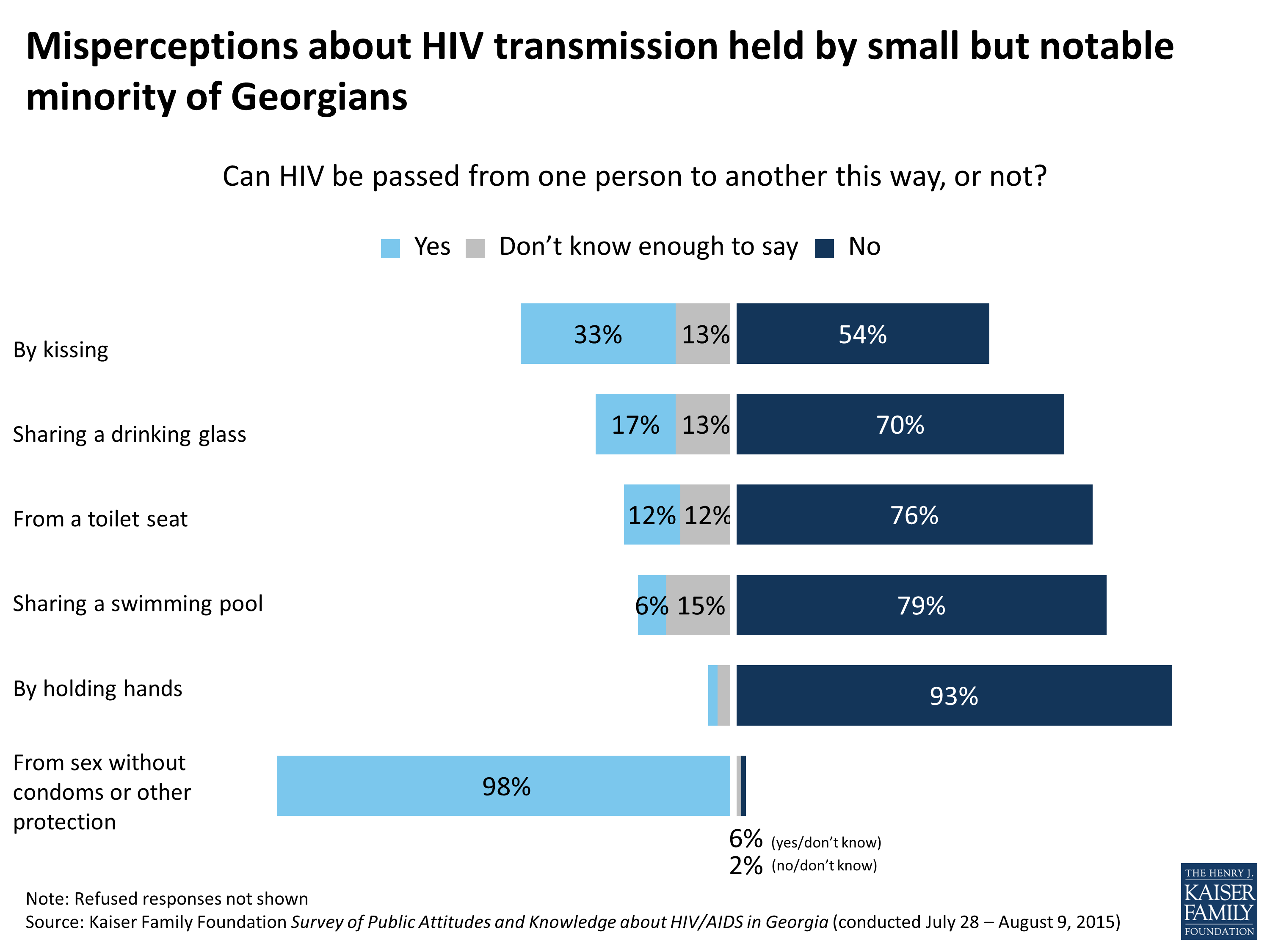 Black residents more likely to get tested, and more often.

More than three quarters of Black Georgians (78%) report having been tested for HIV, including 42 percent within the 12 months prior.  More than half of those who report being tested – 55 percent – say it’s something they do every year.

By contrast, fewer than one in ten white residents (8%) say they have been tested in the last year.  Forty-four percent say they have never had an HIV test (compared with 20% of Blacks).  Lack of perceived risk is the most common reason for not getting tested, followed by not having a doctor suggest it. 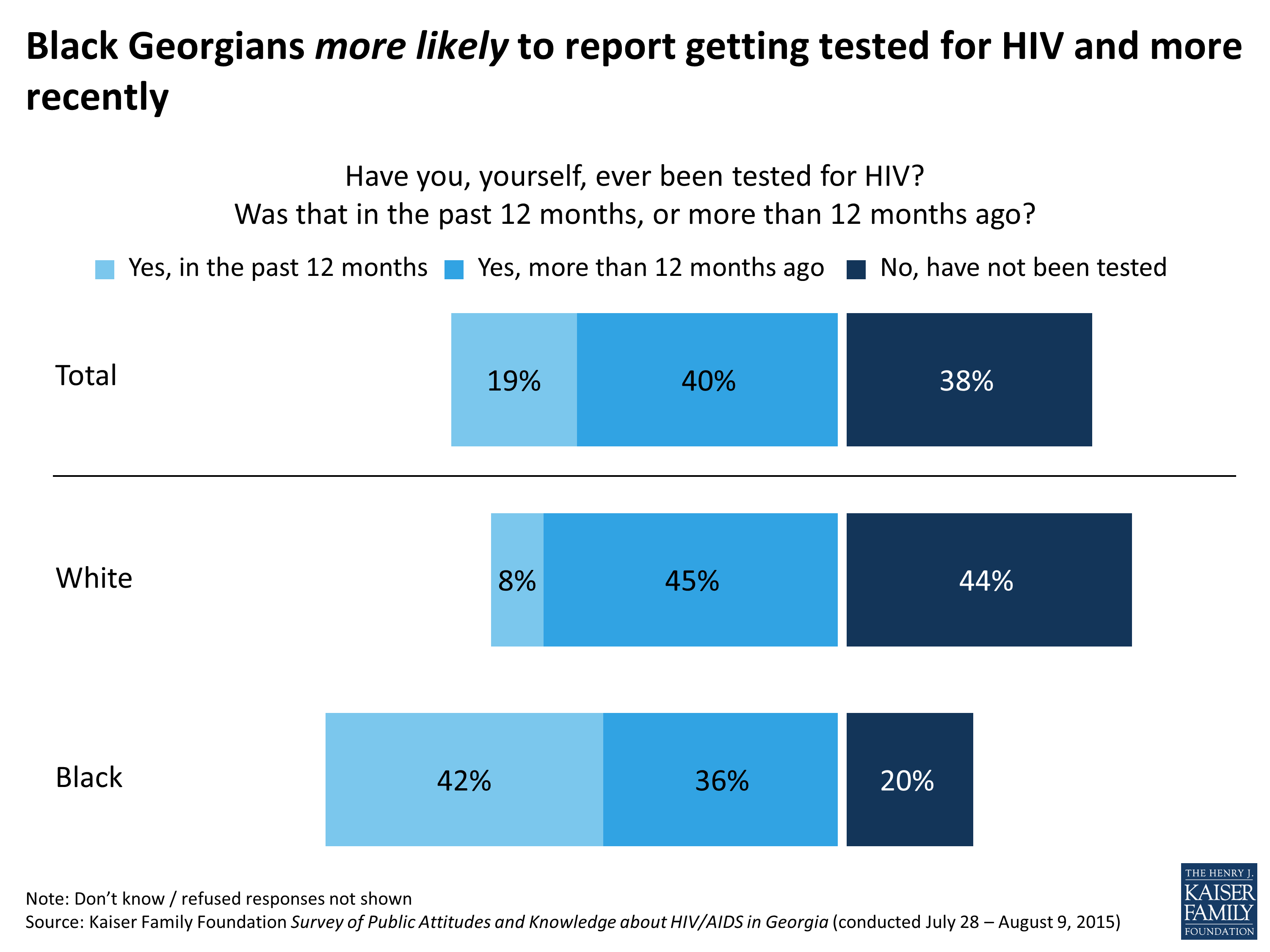 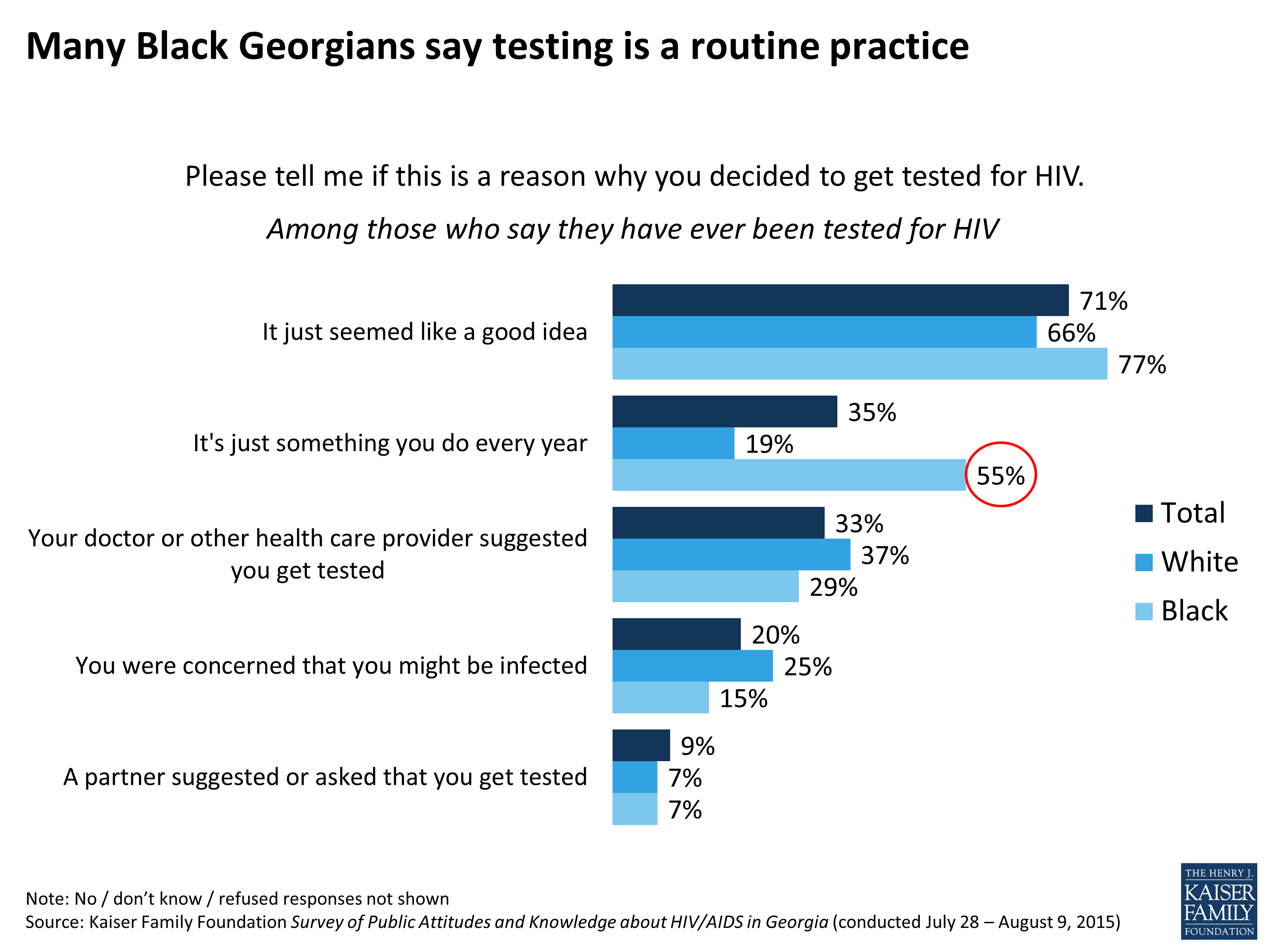 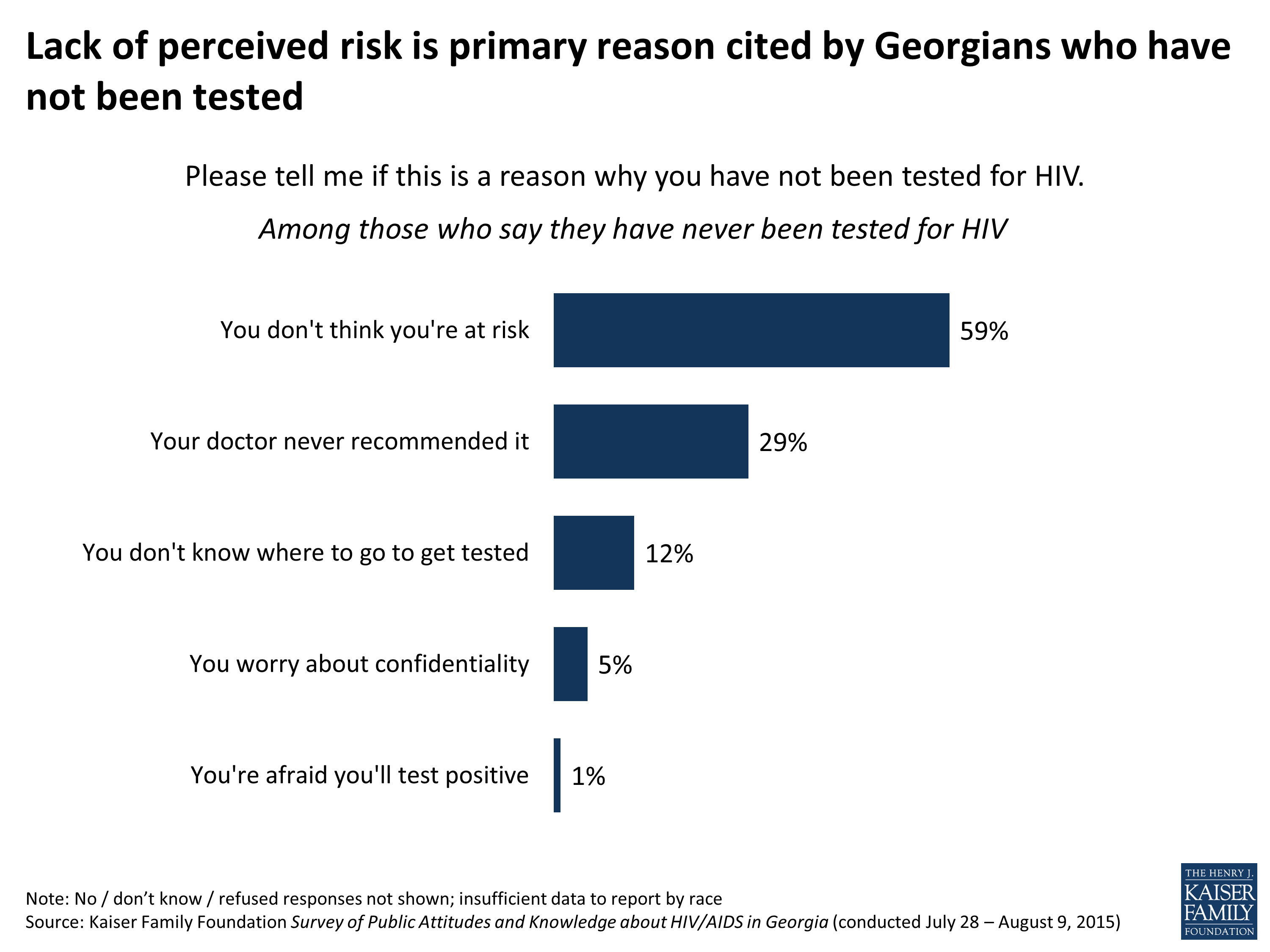 Blacks are also more likely to report talking with a health care provider about HIV; 26 percent say they do this “every time” or “some of the time,” compared to 8 percent of whites.  Though most Georgians, both Black and white, say they talk about HIV infrequently, if at all, in health care settings. 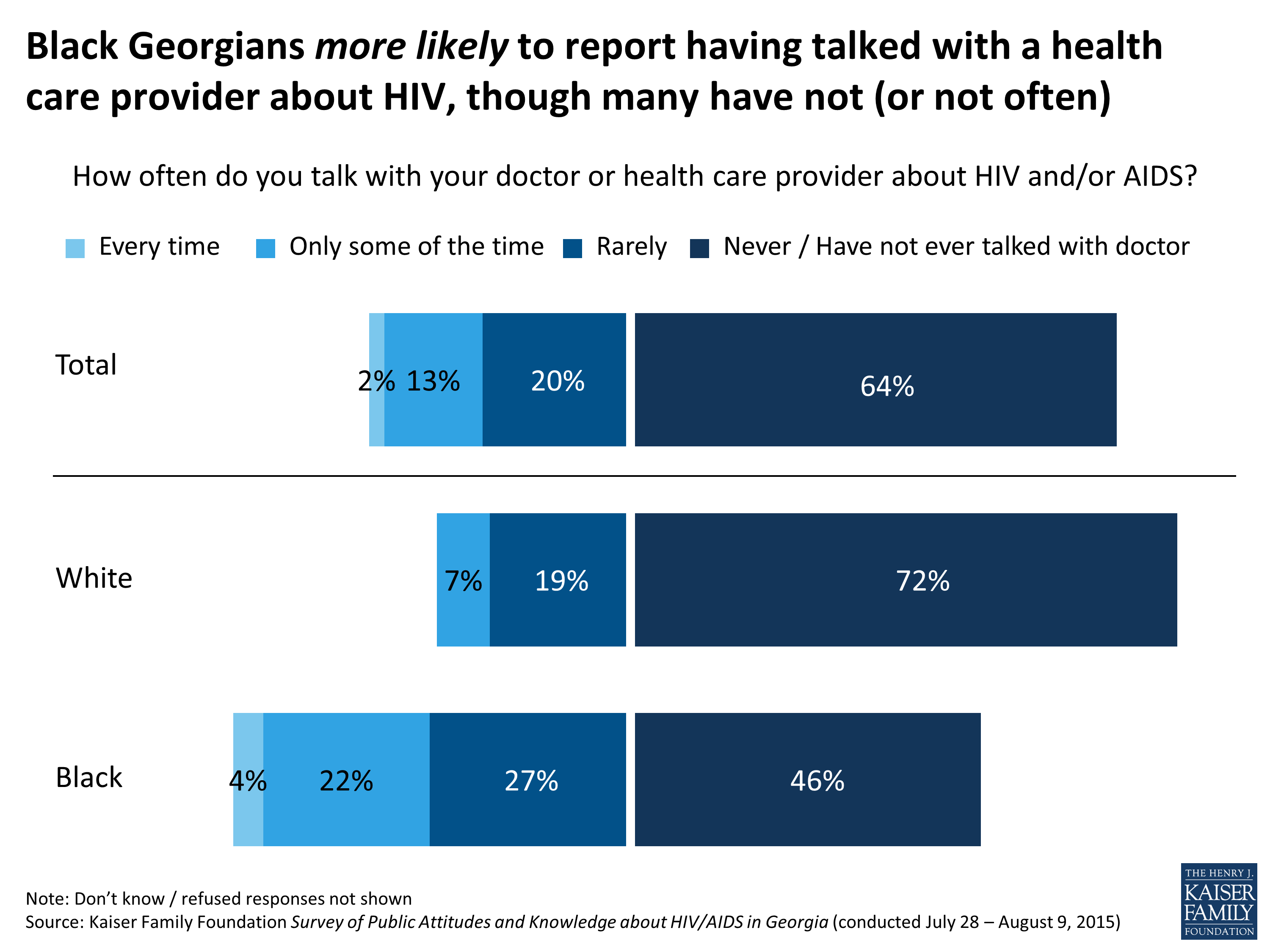 HIV treatments are recognized by most Georgians as at least “somewhat effective” in helping people with HIV live longer (64%) and healthier (56%) lives.  Likewise, about half – 49 percent – know the standard of care is now to start people with HIV on treatment as soon as possible for maximum benefit.  (Those who say otherwise on all of these points are more likely to say they “don’t know” than to respond in the negative.) 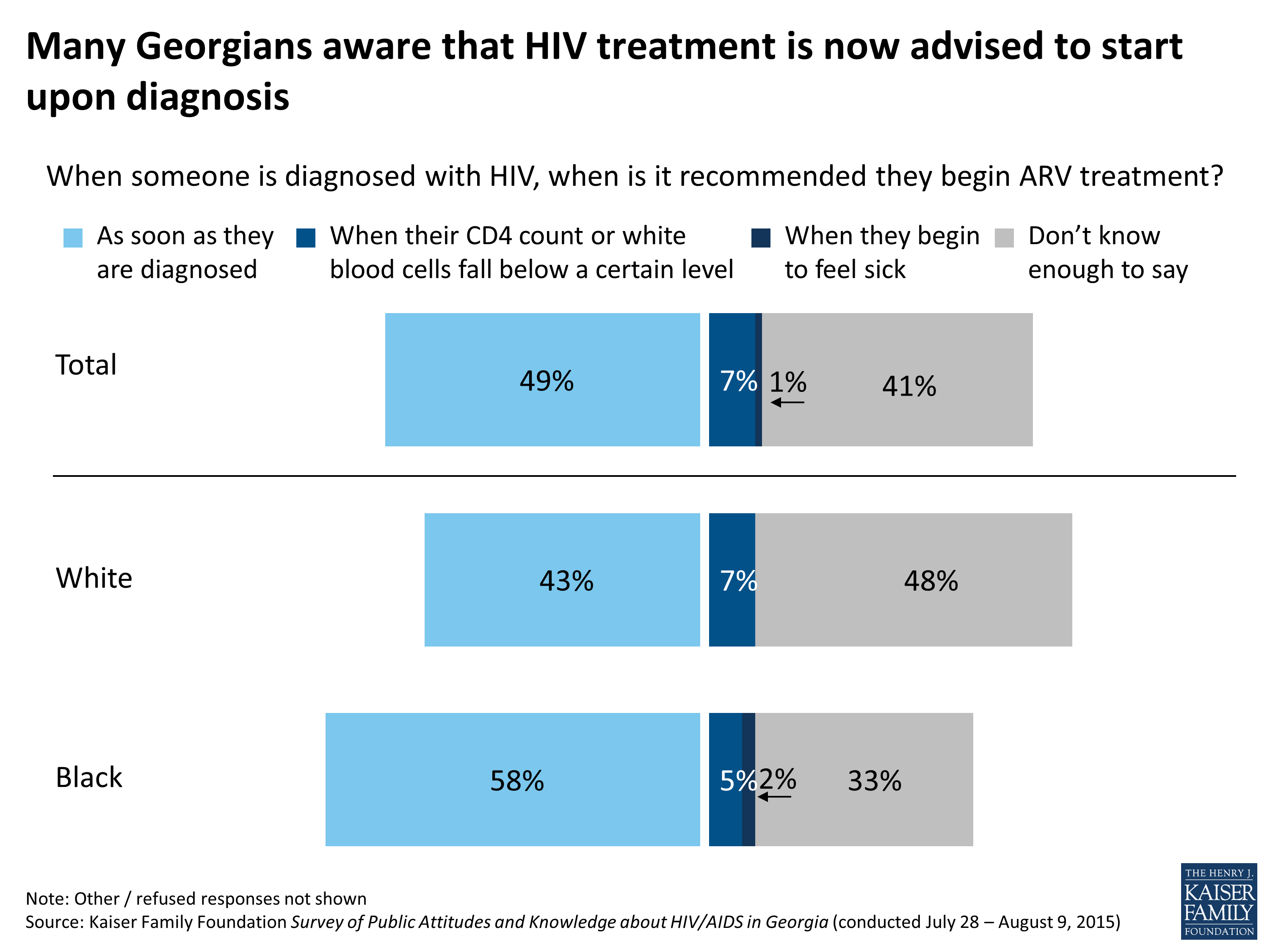 While most Georgians are aware that early HIV treatment is important to improving health and extending life for people with HIV, less well known are its prevention benefits.  Majorities of Georgians acknowledge they “don’t know enough to say” whether HIV treatment reduces risk of transmission (it does), or about newer options to help prevent the spread of HIV, specifically pre-exposure prophylaxis, or PrEP, a once daily pill to protect those who do not have HIV.  Just about one in ten (12%) know about the role of HIV treatment in prevention HIV – to as much as 96% among those who consistently take their medication – and even fewer (6%) know about PrEP. 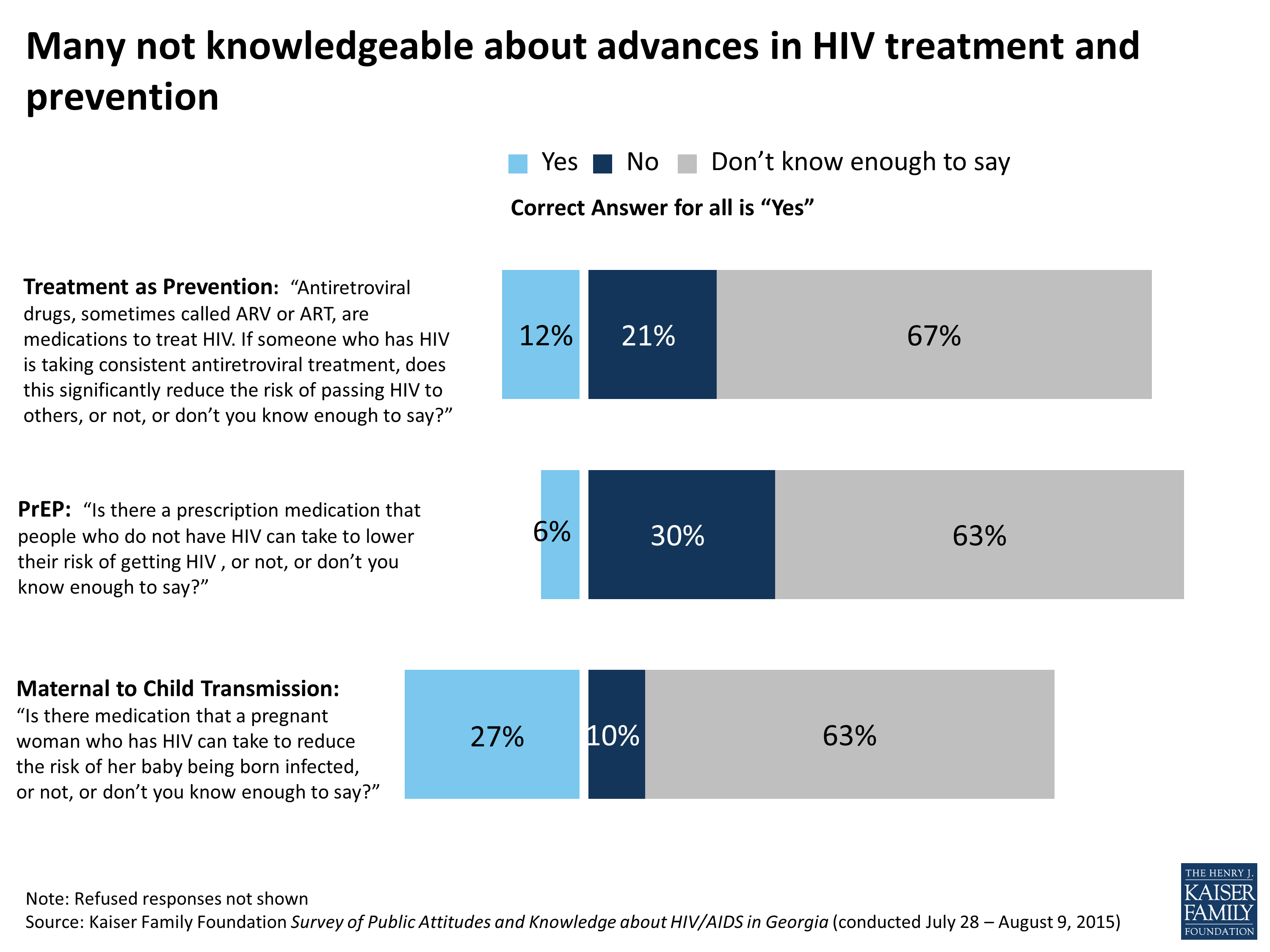 More – though still a minority (27%) – are aware that a pregnant woman with HIV on treatment can reduce the chance of passing the virus to her baby to nearly zero, one of the major success stories in HIV.  Black women are a notable exception with 42 percent knowing about maternal to child transmission reduction. 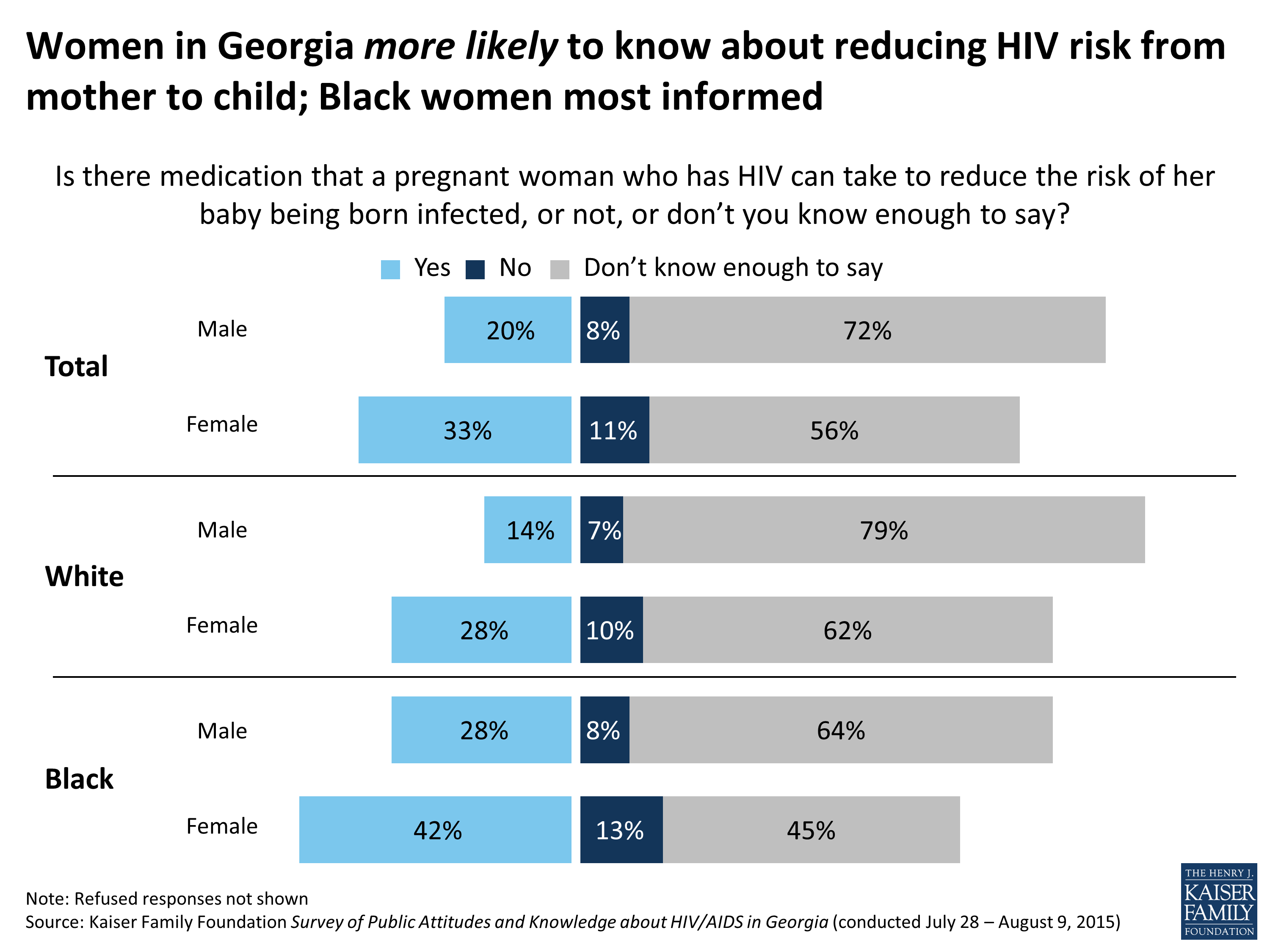 Access to HIV treatment is a concern with half (51%) of Georgians saying that most who need it are not able to get it; another 22 percent are not sure. 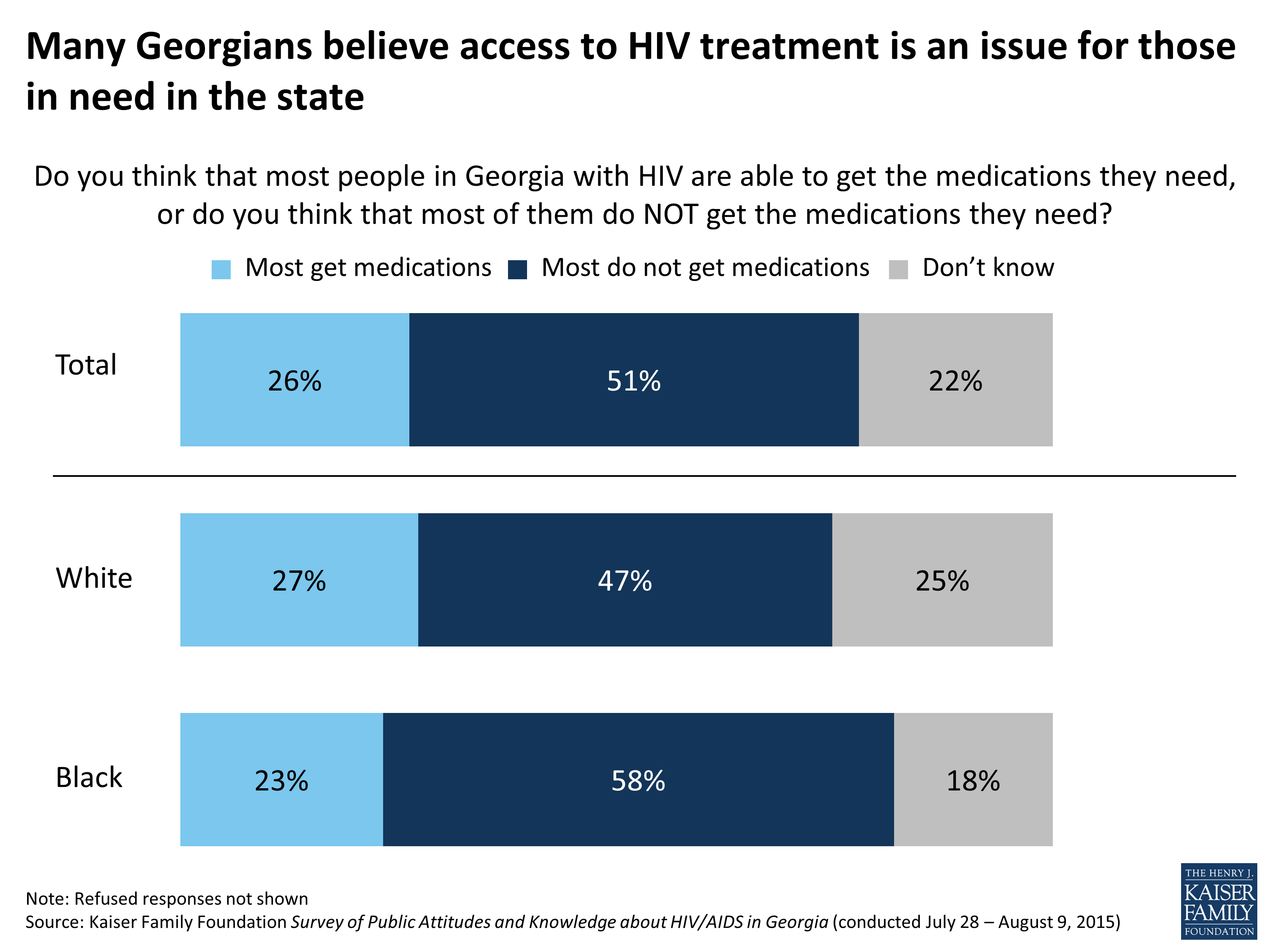 One in two Georgians say they would like to know more about a number of issues related to HIV, including prevention, treatment and supporting loved ones with HIV.  More Black residents report wanting to know more about all topics asked about – with 69 percent listing at least one. 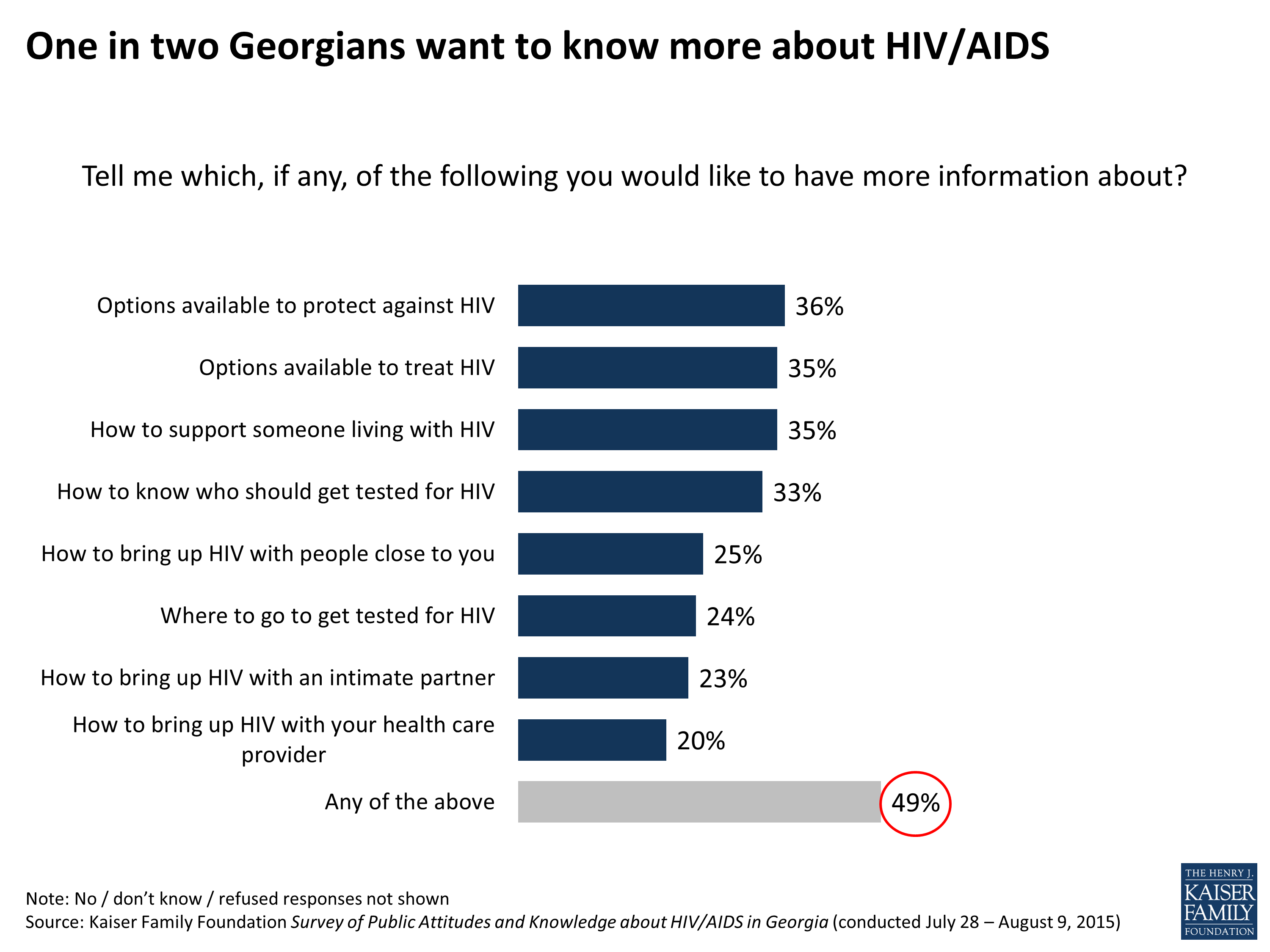 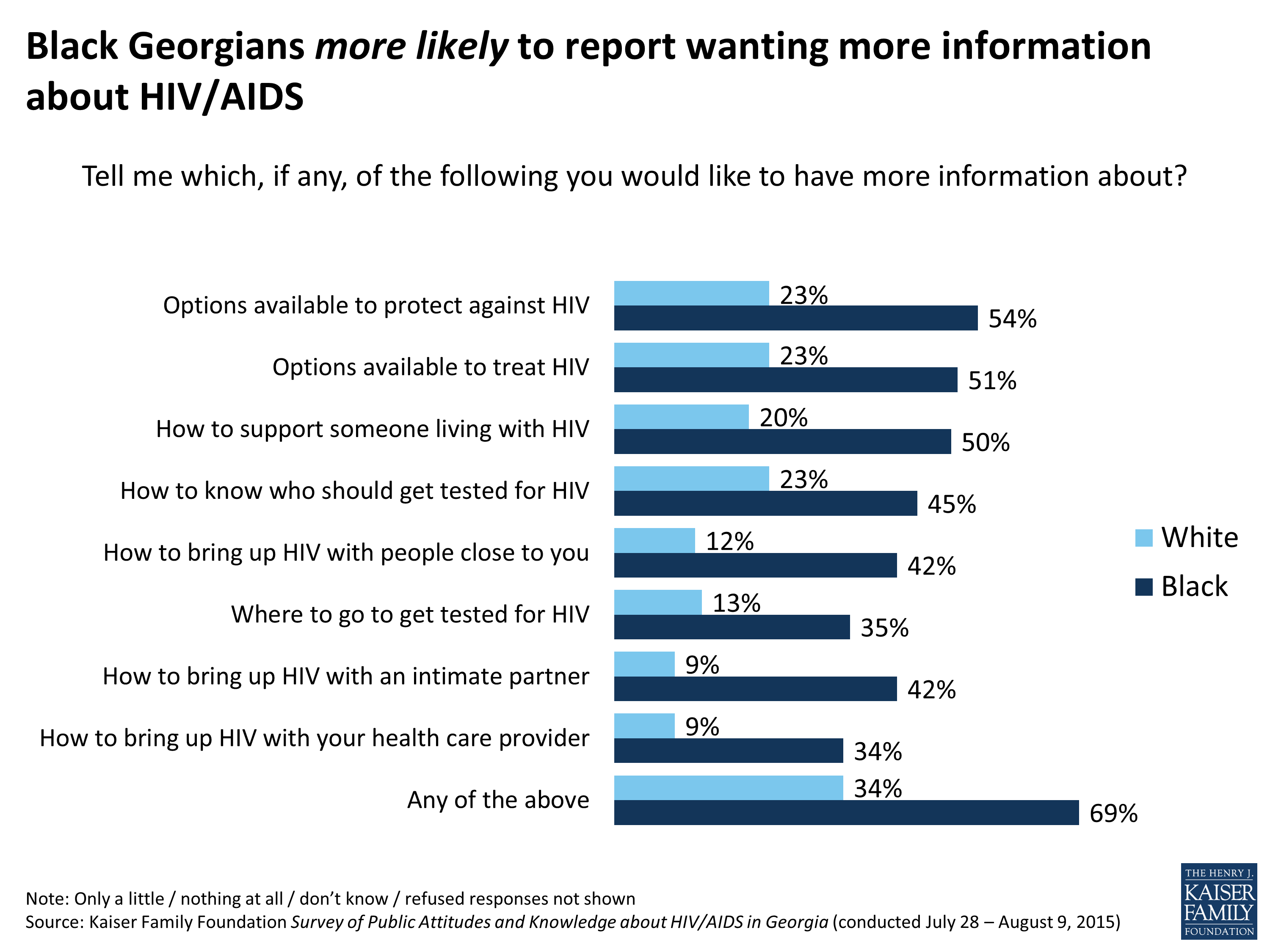 Media – both traditional (radio, TV, print) and the internet – is the most commonly named source of information for Georgians about HIV with more than half (57% and 52%, respectively) saying they get at least some from these sources.  Media was followed by doctors (46%), school (42%) and friends and family (37%) as reported sources.  Blacks are more likely to report hearing about HIV from most sources named, as compared to whites. 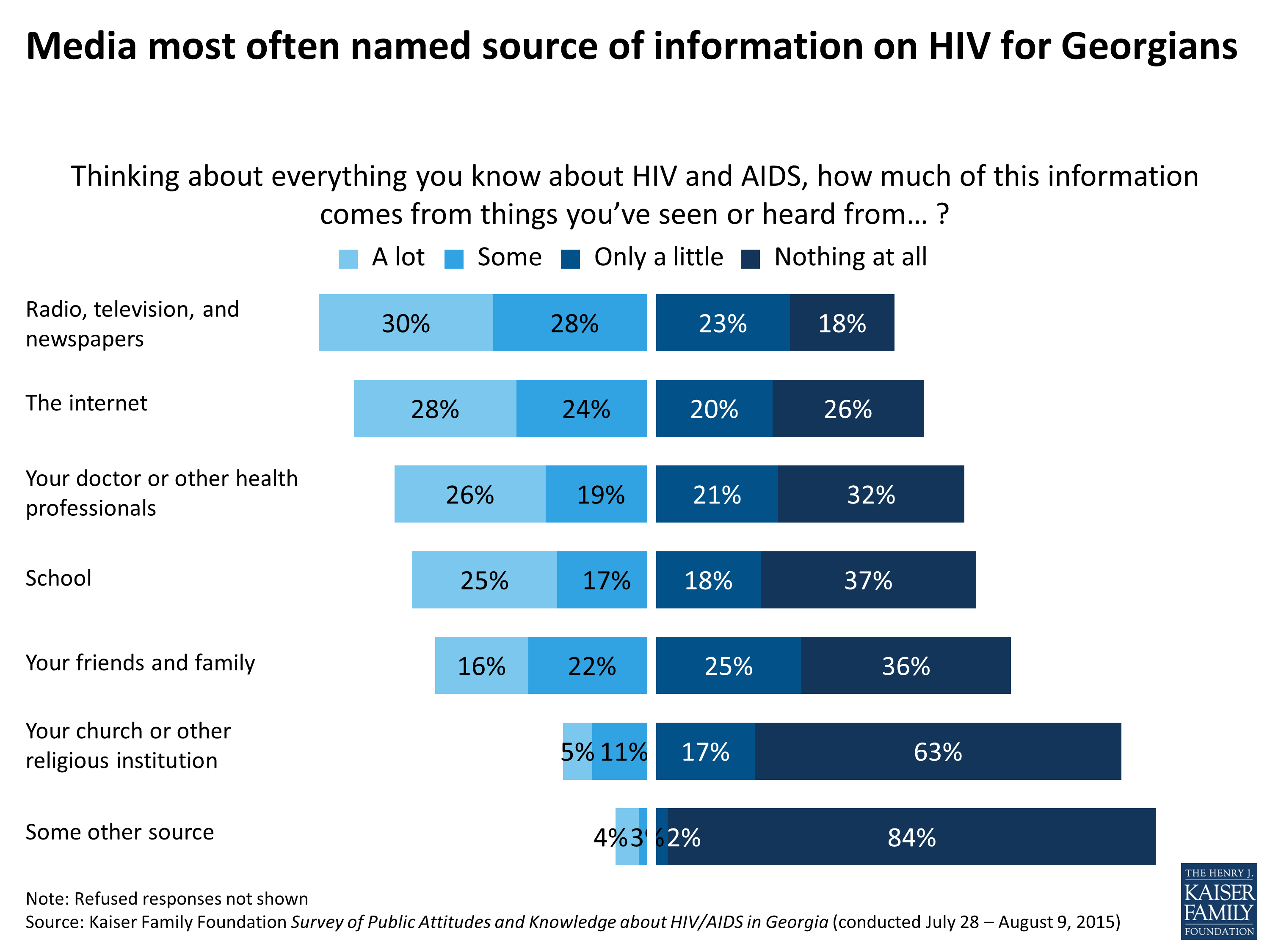 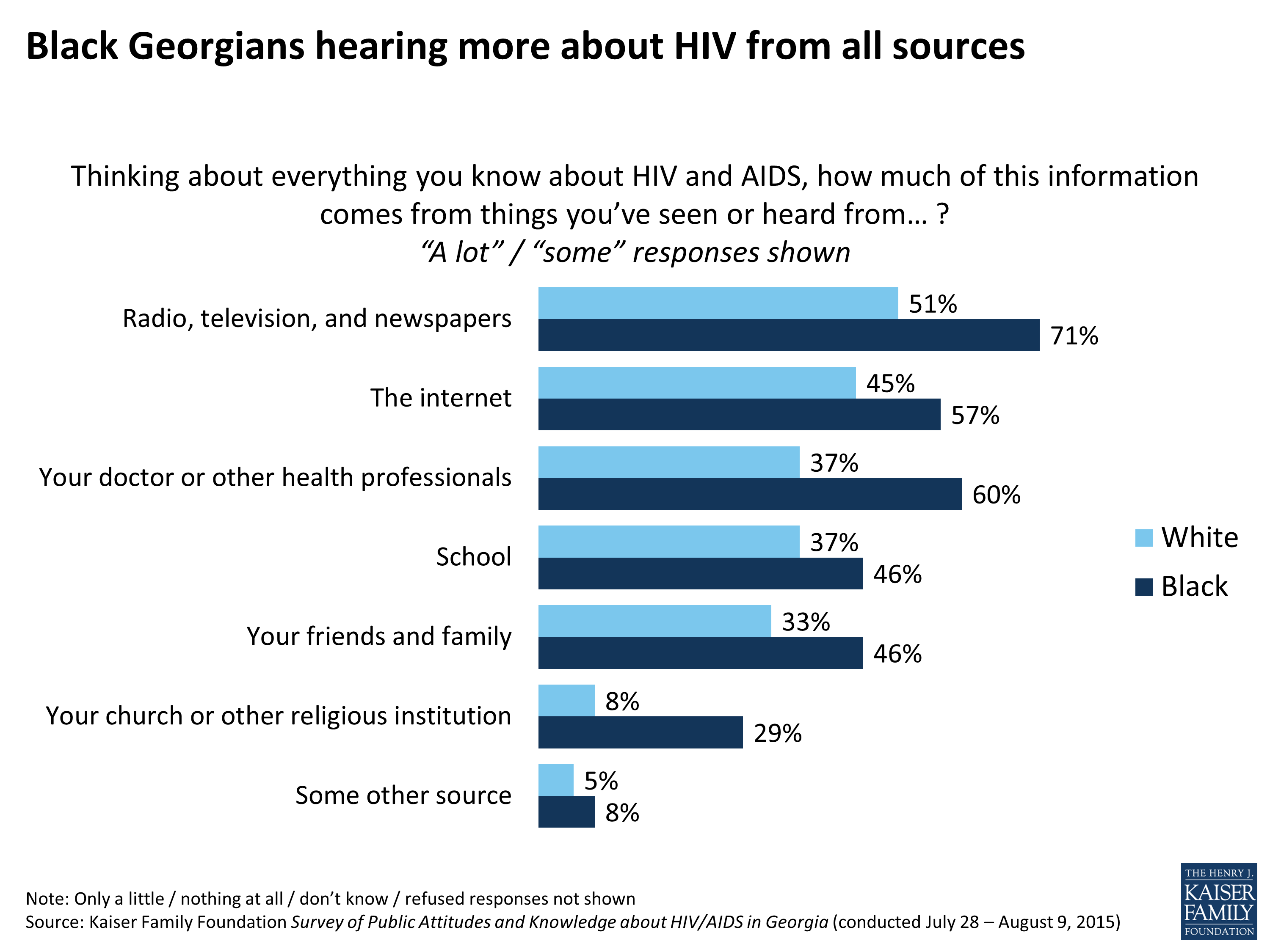