The Power of Love & Family: Ending HIV/AIDS in Black America, A Conversation with Soledad O’Brien

Jussie Smollett, star of FOX’s hit TV show Empire, is joining with Greater Than AIDS and the Black AIDS Institute to headline a special ESSENCE Empowerment Experience panel in New Orleans on Friday, July 3rd on “The Power of Love & Family: Ending AIDS in Black America,” moderated by Soledad O’Brien. The ESSENCE Empowerment Experience is the FREE daytime community forum of the hugely popular ESSENCE Festival.

On television, Mr. Smollett plays Jamal Lyon, the sensitive, talented and openly gay son of music moguls. In real life, Mr. Smollett, who serves on the board of the Black AIDS Institute, has long been involved in addressing the epidemic facing Black America. He along with his sister, the actor Jurnee Smollett (Friday Night Lights, Parenthood,True Blood), have spoken out on behalf of Greater Than AIDS to confront the silence and stigma that too often still surround the disease.

Black Americans have been disproportionately affected by HIV/AIDS, accounting for more new infections and deaths than any other race or ethnicity in the United States. While rates of HIV have decreased among Black women in recent years, a striking increase among young Black gay men is causing concern. The lifetime risk of a Black gay man getting HIV today is one in three, with many infected as teens or young adults.

The hour-long program will explore the powerful influence of family and love in confronting the rising rates of HIV. Ms. O’Brien will open with a one-on-one with Mr. Smollett about his commitment to bringing more attention to HIV/AIDS in Black America, and then continue the conversation with Otis, a young Black gay man living with HIV and Greater Than AIDS Ambassador, and Otis’ mother, LaTongia, who will speak about their own real-life experiences facing HIV as a family. Dr. Leo Moore, a young HIV/AIDS physician who grew up learning to embrace his love for other men in a religious family in the South, will add insights.

“The Power of Love & Family: Ending HIV/AIDS in Black America” panel begins at 4:35 p.m. on the main stage of the Grand Hall of the Ernest N. Morial Convention Center. An in-person audience of more than 8,000 people is expected, and the program will be live streamed on ESSENCE.com.

Throughout the Festival weekend, July 3-5, Greater Than AIDS and partners at the Louisiana Department of Public Health and the Black AIDS Institute will be on the convention center floor, offering FREE HIV testing and educational materials. The Greater Than AIDS booth will also include special guest speakers, a photo booth to capture supporting messages for sharing on social media, giveaways and more!

For more information about Greater Than AIDS, including more details about Jussie Smollett’s appearance at the 2015 ESSENCE Empowerment Experience, visit: www.greaterthan.org/essencefest.

For more information about schedules, ticket sales, accommodations and the latest news about the ESSENCE Festival, visit www.essencefestival.com, join the Festival community: follow on Twitter @essencefest #EssenceFest and become a fan of 2015 ESSENCE Festival on Facebook. 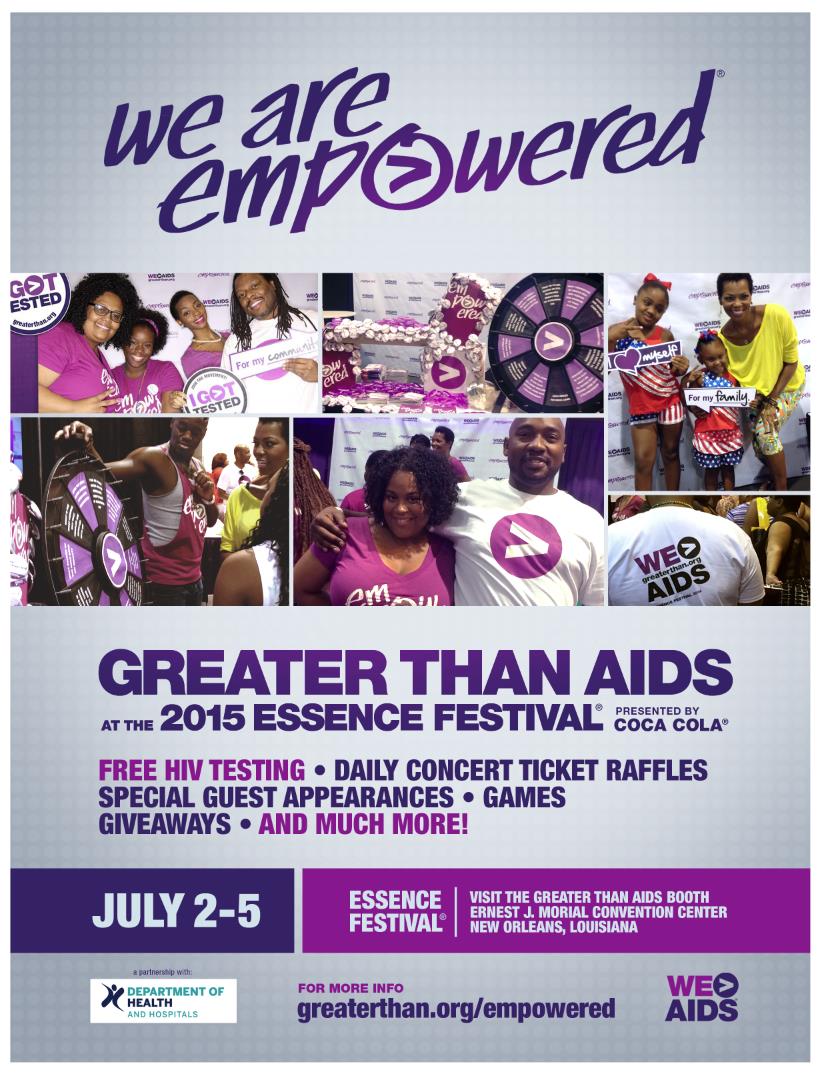 About ESSENCE Communications Inc. ESSENCE Communications Inc. (ECI) is the number one media company dedicated to African-American women, with a multi-platform presence in publishing, live events and online. The company’s flagship publication, ESSENCE magazine, is the preeminent lifestyle magazine for African-American women; generating brand extensions such as the ESSENCE Festival, ESSENCE Black Women in Hollywood and Black Women in Music, Window on Our Women and Smart Beauty consumer insights series, the ESSENCE Book Club, ESSENCE.com, and ventures in digital media (mobile, television and VOD). For 45 years, ESSENCE, which has a brand reach of 13.4 million, has been the leading source of cutting-edge information and specific solutions relating to every area of African-American women’s lives. Additional information about ECI and ESSENCE is available at www.essence.com.

About Black AIDS Institute.  The Black AIDS Institute is the only national HIV/AIDS think tank in the United States focused exclusively on Black Communities.  The Institute’s mission is to end the AIDS pandemic in Black Communities by engaging and mobilizing traditional Black Institutions, leaders, media, and individuals in efforts to confront HIV/AIDS.  The Institute disseminates information, offers training and capacity building, and provides mobilization and advocacy from a uniquely and unapologetically Black point of view. The Institutes motto is “Our People, Our Problem, Our Solutions!”  www.BlackAIDS.org