In the latest installment of #AskTheHIVDoc, a popular YouTube series from Greater Than AIDS, Dr. Leandro Mena joins Drs. David Malebranche and Demetre Daskalakis to give frank, no-nonsense answers to commonly asked questions about HIV.

“You have some questions? We know HIV,” says Dr. Daskalakis.

In addition to the 20 new questions the three docs answer together, Dr. Mena answers an additional 11 questions in Spanish. A recent CDC survey found that 1 in 4 Latino gay men will get HIV in their lifetime if nothing changes.

“We’re going to give you what you need,” says Dr. Mena. 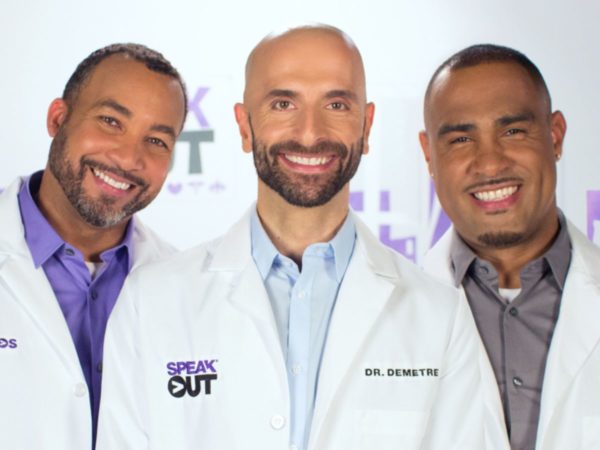 Like the other segments in the series, such as the recently launched All about PrEP! series, the tone is playful and fun but the content is straightforward, engaging and packed with important information.

“Sometimes we get driven by the fear of what could happen. Flip that and think of the positive things: This could open up a whole conversation,” explains Dr. Malebranche about sharing your HIV status with a partner.

A 2014 survey from the Kaiser Family Foundation found that gay and bisexual men aren’t talking about HIV with the people closest to them – not even with their health care providers. #AskTheHIVDoc gives viewers the opportunity to get real, relevant information about their sexual health wherever they are – on their phone, tablet or computer.

Greater Than AIDS partners Grindr4Equality, Here Media (OUT, Advocate, Plus, pride.com and more), Rivendell Media, Hornet and Scruff are helping to promote the series through their platforms. The series was filmed at Here Media’s studio in New York City.

What do YOU want the docs to answer? Ask now using #AskTheHIVDoc and @GreaterThanAIDS on social media.

Dr. Charlene Flash – an HIV specialist and primary care doctor based in Houston – joins the superstar roster...
Dr. David Malebranche, MD, MPH – aka “Dr. David” - is back with more than 40 new #AskTheHIVDoc videos about...